After an incredibly busy holiday (and a wedding) things have calmed down enough to get back to the painting table.

I bought the Vampire Counts battalion and a couple of boxes of skeletons (I see my Vampire Counts army having many, many ranks of skeletons). Whilst it may be a bit of an impulse purchase, I've always fancied having an undead army, so why not in 2010?

Before breaking open the box, however, and getting bogged down with much bleached bone, I thought it would be a good idea paint something easy and of minimum effort, and decided on the contents of the Battle for Skull Pass boxed set. Well, the Night Goblins.

After undercoating the contents, I realised I had made a classic (and terrible) schoolboy error in that I'd left the mould lines on. As the pictures show below, I've had to remove them before starting and now have a lovely black/plastic-grey effect going on. That'll remind me not to rush! 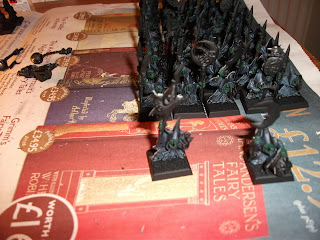 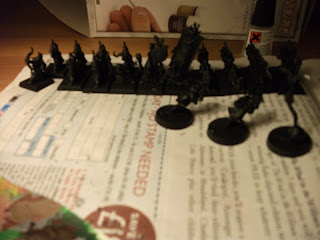 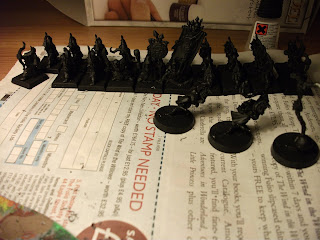 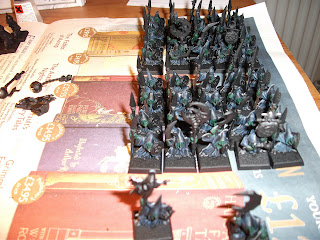 Once these are completed, I'll make a start on the Vampire Counts.

In other interesting news, I've found what could be a local gaming group (i.e one not full of twleve year old children) and am awaiting a response. This could be a chance to get some interesting and challenging games in!
Posted by closet gamer at 13:33 No comments: